My Senior year at Brigham Young University I participated in the school’s first ever large group Video Game project. I worked with a group (we started off with around 25, by the end we were down to about 15 or so) from the Animation, Computer Science and Illustration departments. We spent two semesters (and then some) on a game we ended up calling Darkness Released. 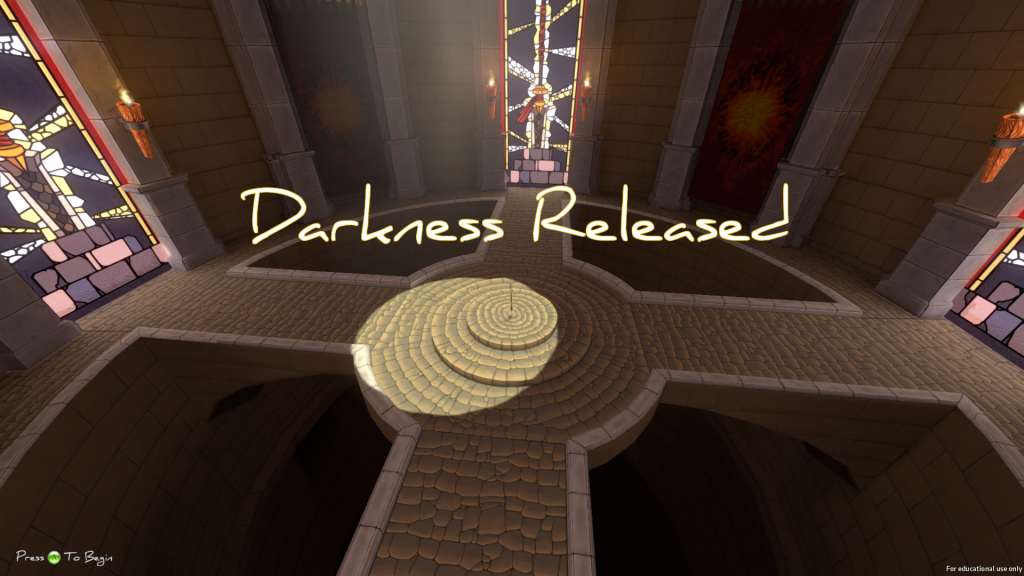 We spent the first part of the first semester learning how to use the Unity3d engine and pitching different concepts as well as prototyping. We eventually settled on a third-person action game, and decided that we were going to only make Boss fights. Originally the working title we had was “Boss Arena”, a name which unfortunately stuck around until the day before we submitted the game to the E3 student competition.

In the game you play as a Glaive-wielding hero who accidentally releases a dark shadow into the world, and now you have to fight the various manifestations of that darkness, face and defeat your fears, and bring the light back into the land. Or something.

We spent nine months prototyping, coding and arting the game together. We managed to get one of the bosses fully working and put together, in addition to the hub, player mechanics and tutorial. We submitted this build to the E3 student competition in April of 2014.

Unfortunately, we were not in the top 5 student games, and were not invited to attend E3 as finalists.

On the project I worked mostly on one of the bosses that eventually got cut. It was designed to be a fast, duel-style boss fight with a living gargoyle (which I lovingly dubbed ‘Mishra’). The boss was coded and designed to get more aggressive as the fight went on, and as the project progressed it got to a point where it was not only challenging, but really fun to play. We never got much further than having a working whitebox fight, but even without having final (or really any) art it was in a fully playable state.

Unfortunately we ran out of time, and the biggest thing we lacked was the artists we needed to get everything done. Also, granted, our boss was a quadruped cat-gargoyle-porcupine-monster-thing, so ours was cut.

After the boss was cut I spent time coding the UI and HUD. I worked with one of the artists who created the sprites and we made the in-game pause menu, vital bars for the player and boss, as well as credits scene. I also helped to design and write the tutorial area, the tutorial messages that appear throughout the game, as well I designed and coded the health pot mechanic.

The project was a ton of fun, and while it didn’t end up being everything that we hoped it would be, it was a learning experience. BYU will hopefully be able to take what we learned and make other amazing future projects (you guys better win next year) while I am able to say that I learned and grew from that project and I hope to also make great things going forward.

Forgetting what you were doing the second you get up to go do it every single day...

Super cool video of a wildlife bridge here in my home state. We need to build more of these in the US, as our highways divide and disrupt natural habitats. Wildlife bridges like these save lives, both human and wildlife alike.
https://www.youtube.com/watch?v=Df0d-OTqC1A

im actually really pleasently surprised to see headlines that explain who elliot page was before so you know who they are, but also don't deadname him