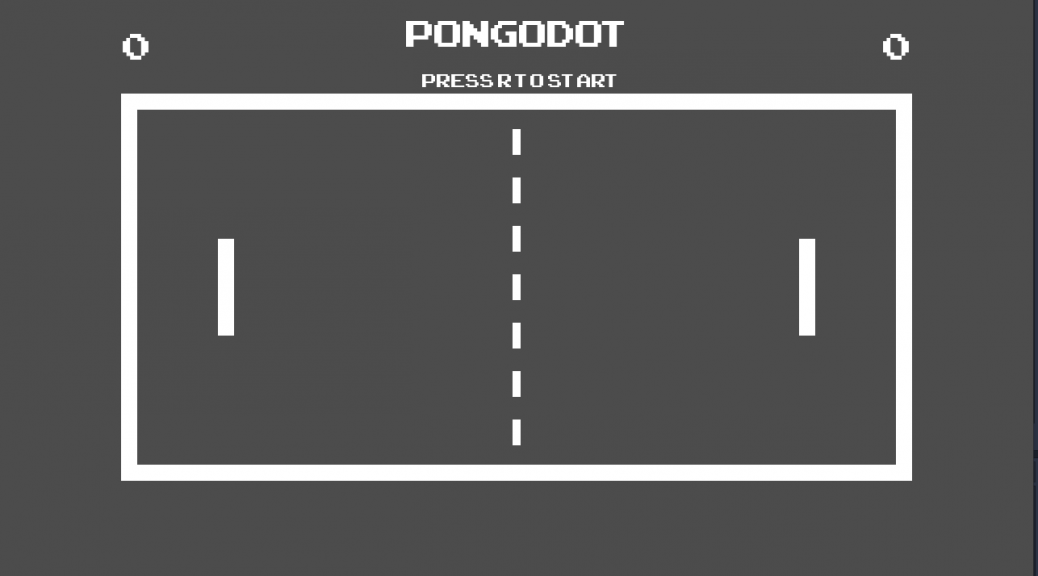 Today’s post is going to be pretty short. The goal today was to add a start screen and a victory/defeat condition.

For the start screen, into our main Scene tree I added in a new label, with very similar settings to the first. From code I can easily turn this label on and off. As a child node to the main label I added another label with smaller text that says “Press R to Start” to tell the player how to start the game. Now when the game boots up this is what you see.

Player Paddle.gd has a similar change with a new variable, is_active that we check in _process before obeying any input.

In that first block you’ll likely notice a check to a new action as well. In our input map I also added an action to start the game by pressing ‘r’. In the future I might just instead have it also happen on spacebar, but for now this works.

Here I’ve added in a max_score, set to 3 for now for testing purposes, as well as a center_text variable. This is where I can easily set the text for that main label, like you see in the above screengrab.

Finally, at the bottom of GameController.gd there is some logic that handles checking for victory/loss.

And with that it’s now possible to win (or lose).

Sorry for the condensed nature of today’s post, but I didn’t have a lot of time for today’s changes. Hopefully future posts won’t be as rushed.

Here is now the current version, in full, of the GameController script.

A Light in the Dark, A Star Below🌟

A Star Below | A fantasy adventure webcomic@astarbelow·
22h

Filler page! Madeleine shares some insight into the visual development of the fearless leader of the Smashers, Dorian!

MEGATHREAD on all of the developers who have shown their early builds to support Rockstar Games following GTA 6 graphics criticism: